Woke-up to the sound of helicopters flying above our house. This would make it the fifth or sixth morning of helicopter music. It’s directly linked to the monster fire happening in Central Washington State, I believe reaching over 256,567 acres. From our house we can see the Cascades and Mount Rainier, but on Sunday it was nothing but haze from the smoke coming our way. The smell followed, not strong, but we were aware of it. Today it looks better, still a little hazy here and there, but much better. Rain is coming! Thank you God for the firefighters that came to help, and I pray comfort and health for those who suffered the wrath of the wild fires.

First picture is from the front of the house, second from the back, you can see in the second one a small plane riding above the Cascades. 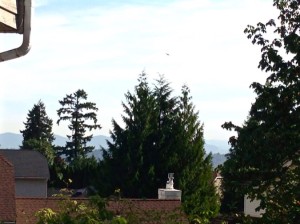 On a personal note, I’ve had another IV treatment yesterday and as expected today I’m hugging horizontal surfaces again and life goes on:) Last Thursday my body decided to break my daily routine in a song of pain and tears for a good half a day, accompanied by extreme front and back lower abdomen pain and spotting, blood that is. Well…as of yesterday the doctor is aware and if this shenanigan does not stop I’m to see him tomorrow for further testing. So far, the spotting has declined its presence but the aches refuse to vacate the premises. One theory is buzzing around, ovary cyst may have burst, but so far it’s a theory and we all know what that means unless proven there’s not much to stand on. Wishing you a great day and I pray great health over all of you, because it sucks to be in this much pain for this long. Ta, ta for now:)