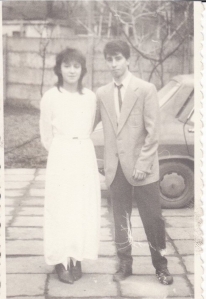 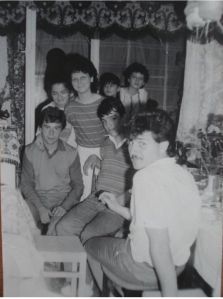 First picture. Simona on her baptism day with a local friend.

Second picture.  Bunch of friends from the Baptist church Simona and her family attended on her older brother, Alin’s eighteenth B-day Party (not in the picture, in fact I do not have a picture of him). Simona and I are in the back, the two youngest kids there:)

In actuality, Simona is my third cousin on my mother’s side. Same as Mirela, but that’s another story for another time.

It was Simona’s father, Ionel, who enticed my parents to move all the way from Moldova to Transylvania, more precisely to the young city of Hunedoara, where a new steel factory just got built and jobs were “falling from the skies” so to speak. Moldova’s economy was in ruin, not sure if much of that changed today, and most of the young people migrated south, west and east all over the country, where jobs were easier to come by. Sergiu was the first-born in Hunedoara, (Alin and I were born in Botosani). My young parents moved to Hunedoara in 1976 and left that town only recently, moving closer to their remaining children in Romania. The move was unexpected and sudden due to my mother’s declining health.

Unlike me, Simona grew up in a much smaller family. Her only sibling was an older brother, Alin. The age and gender gap forced a lonely Simona childhood on Simona. However, during her adolescence that loneliness was well-balanced with a very active social life in the local Baptist church she attended. There she began her singing career and her lovely voice is also passed down to her one and only daughter.

Both her parents worked which it simply meant a better financial life, overshadowed by the high pressures for academic success. My parents never seemed to have time or interest about our academic success and we surprised ourselves how well we still did in spite of that. Simona’s parents on the other hand were hands on, diligent and persistent. Learning English was one of those academic demands and I was very glad she learned the foreign language, especially after I met Chet. I would take my letters and run all the way to her apartment eager to find out what Chet wrote to me. After words, with a  dreamy expression on our faces, we would lie down on her sofa or sit outside on her enclosed balcony wondering what a married life had to offer to our livers or how different American life was from ours. I would soon found out about both. I knew I was blessed with Chet in my life, and I saw the longing in many of my female friends but I couldn’t do anything about it except share pieces of this unique experience with some of them. Simona and I sure shared some nice times together:) Younger by a couple of year we hung out with each other only when we were allowed by our parents. I had a couple rare and precious sleep overs at her apartment and I loved the quietness, the books she had and the board games we played. Also the food, hmm, she always had good food:)

My first “majorat” as it is called in Romanian, which stands for turning eighteen, the age when you’re considered an adult in Europe, meaning you can drink (which we did not do) it was for Alin, Simona’s older brother-second picture. I was young both in age and mind, naive and gullible. In fact, Simona and I were the youngest two out of everyone there and tried hard to fit in and play along the fun games that were totally foreign to me. I lost a lot and tried to keep up a brave facade but I had a wonderful time that evening. The Christian parties of that time were very safe and had such an innocence to the whole experience, something I appreciated both then and later on in life.

Well, my little cuz (short for cousin) was a fresh breath of air for me, and I do remember one of my best friends having a crush on her, something that brought a touch of jealousy in my heart at the time:)))))

While in a three-day fever unconscious state, between the ages of 10-13 years old (can’t remember exactly), I do remember in one of my brief waking moments, Simona’s mother, miss Ghinuta, sitting with my mother by my bed side holding a bag of apples, apples she brought along for us. I always preferred fruits over deserts. I opened my eyes and they were talking to each other only to slip back into darkness for another twenty hours. Miss Ghinuta and her husband Ionel were always nice to me. Alin too, even though her liked to tease us any chance he got. At least his sense of humor was not dangerous and painful:)

Simona, if you read this, and I hope you will, I miss you and I look forward one day to see you and catch up on life:))))))

Thank you God for my cuz:)