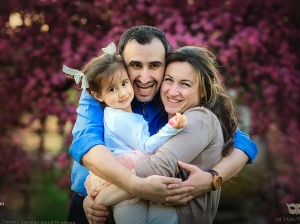 Born the seventh in the family, Flesh (nickname) falls in the team of the brunettes along side myself, Alin, Iosif, Alex and Oana. The blond team is made of Sergiu, Marius, Delia, Tibi, Iulian and Fanu.

Flavius was a cute boy, with great dimples in every smile, energetic and full of humor. His adolescence was filled with great humor and lots of energy, hiding a boy that got frequently panicked and stomach pains from the stress of the abuse.

His last year of high-school he left for Germany and lived with my brother Sergiu a few months, and together with Leo responded to a local newspaper add that were looking for soccer players. They both got in and quickly Flesh became the star player of the entire team with great professional prospects. Leo, who was interested only in the snacks provided after words got kicked out. The only thing standing in the way of fame and fortune was the paperwork. At the time Germany’s borders were not so open like today and the paperwork stopped Flesh’s progress forcing him to return back to Romania. After finishing high school he moved with Alin in Arad. There he finished four years of collage in engineering. He met his wife, Adina in Ilia, while in collage and got married after he graduated then together they settled down in Timisoara. Together they have one daughter.

Adina works in the marketing/ computer field and Flesh is a radio host/presenter at a Christian Radio Station in Timisoara, rve.timisoara, and very involved in the local church they attend.

The past five years a big shadow of health challenges have put a lot of stress on his shoulders and he spend more days in emergency than all of his siblings put together. He’s had operations and multiple tests. In the end there’s still no diagnosis. But stress in general is an enemy of his, weakening his immune system.

Lately he’s been feeling well, but I think he has to watch his diet and stress level constantly.

Our potentially famous soccer player has a very domestic life in the church and his radio work:) He also had to forgive a lot but life is good and we’re moving on:)

I’m glad when I hear his health is good and I’m looking forward to see what their future will bring along:)